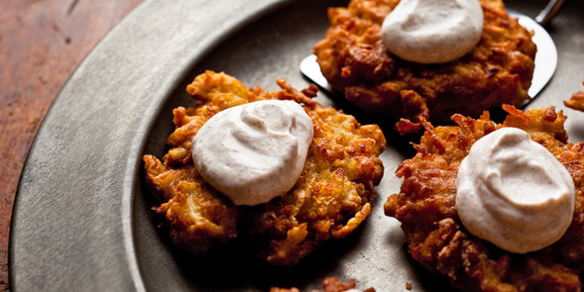 In a small bowl, whisk together the sour cream or yogurt, cinnamon and maple syrup. Cover and chill until ready to use.

Coarsely grate the apples, potato and onion using a large holed cheese grater. Put the mixture in a clean dish towel and squeeze to wring out as much liquid as possible. For the crispiest pancakes, you want the least moisture.
Working quickly, put the mixture in a large bowl, add the flour, eggs, salt, baking powder and pepper, and mix until the flour is absorbed.

In a heavy-bottomed pan over medium-high heat, pour in enough oil to cover 1/4 inch of the pan. Once the oil is hot (a drop of batter placed in the pan should sizzle), drop heaping tablespoons of batter into the pan, cooking 3 to 4 latkes at a time. Use a spatula to flatten the scoops into disks. When the edges of the latkes are brown and crispy, 2 to 3 minutes, flip them. Cook until the second side is deeply browned, another 2 to 3 minutes. Transfer the latkes to a plate lined with paper towels to drain. Repeat with the remaining batter.

Serve with dollops of the cinnamon sour cream on top.