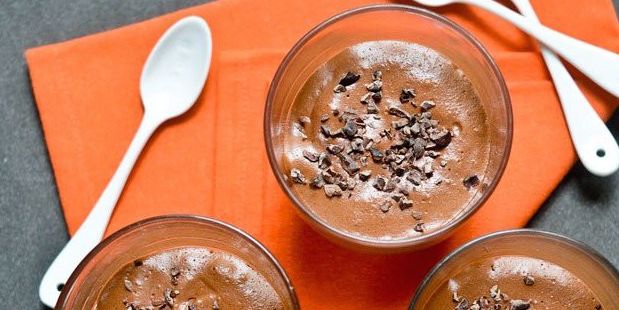 Pour the aquafaba into a clean mixing bowl, or the bowl of a stand mixer, and set aside.

Place the chocolate in a double boiler and heat until just melted.

Pour into another mixing bowl and allow to cool for a few minutes.

Using an electric whisk or the whisk attachment of a stand mixer, whisk the chickpea water (aquafaba), salt, and cream of tartar to soft peaks. This should take 2 to 3 minutes.

Gently stir a third of the whipped chickpea water into the melted chocolate, until fully incorporated.

Fold in the remaining chickpea water in two additions, using a spatula and lifting the mixture in a circular up-and-down motion to avoid deflating it, until fully incorporated.

Pour into the prepared cups, level the surface with the spatula, and sprinkle with cacao nibs.

Transfer to the fridge, and allow to set for at least 2 hours before serving.