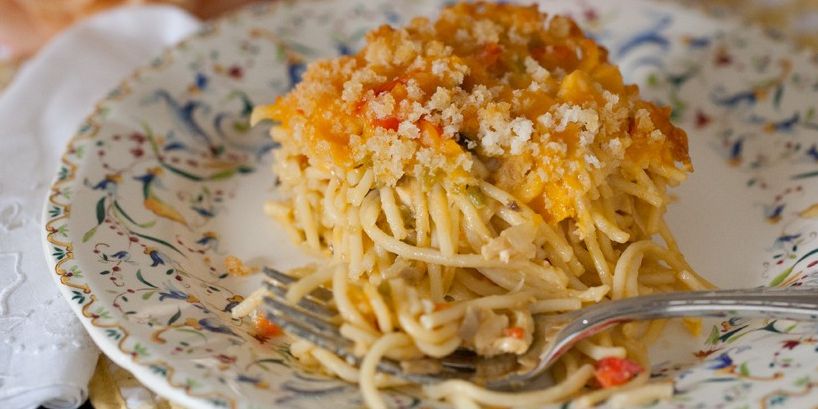 Preheat the oven to 350 degrees.

First, season and cook the chicken. I use Johnny’s Seasoning Salt, but a little salt and pepper is fine, instead. Pan grill the chicken (or cook in a non-stick skillet) until cooked through. Allow the chicken to rest for at least 10 minutes and then chop it up into small pieces.

Melt the butter in a sauté pan. When the butter has melted, add all of the chopped vegetables, onion and garlic and sauté until tender. Sprinkle the flour over the vegetables and cook for another minute or two, stirring constantly. Add the chicken broth and continue to stir until a thick sauce has formed. Add the Half & Half and stir until combined. Add the chopped tomatoes, green chiles and 6 ounces of the cheddar cheese. Stir until the cheese has melted. Add the chopped chicken and stir. Now, taste this sauce and add salt and pepper. It will need it. We have used low sodium broth and we are not using canned cream soups which typically add a lot of sodium. You will need to season at this point. Seriously, taste it.

In a small bowl, combine 1 Tablespoon of melted butter and ½ cup of Panko crumbs. Season with seasoning salt, or regular salt. Distribute the remaining cheddar cheese on top of the chicken spaghetti and then sprinkle the Panko on top. Bake in a 350 degree oven for approximately 25 to 30 minutes, or until hot and bubbly. Allow the casserole to sit for at least 5 minutes before serving.