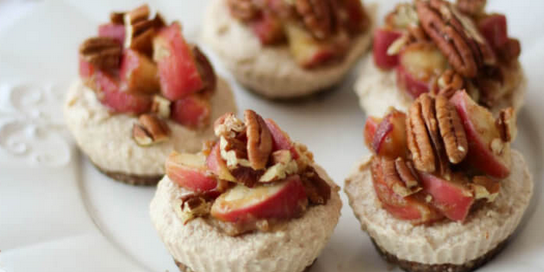 In a food processor, puree the dates, pecans, oats, cinnamon and salt until it forms a sticky crust-like consistency. Press about 2 tablespoons into the bottoms of 12 silicon cupcake liners, transfer to the freezer for an hour.

Meanwhile, puree the cashews and dates until well pureed, then add in the soy milk, lemon juice, coconut oil, vanilla and cinnamon. Puree until very smooth.

Add the mixture to the frozen crust mixture, and freeze for 4-6 hours.

Right before serving, puree the dates in the food processor until gummy, then add in the salt, lemon juice, soy milk and vanilla. Puree until it reaches a very thick caramel-like consistency.

In a bowl, toss the apples with the caramel until well coated.

Carefully remove the cheesecakes, top with a spoonful of the apple caramel and pecans and eat with a fork immediately.