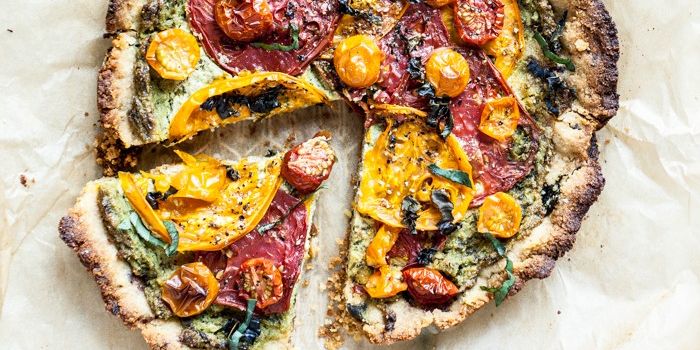 3. In a mixing bowl, stir together the almond meal/flour, garlic, basil, salt and pepper. Pour in the olive oil and water and stir until the mixture is thoroughly combined.

4. Press the dough into your prepared pie plate until it is evenly dispersed across the bottom and up the sides. Bake until the crust is lightly golden and firm to the touch. About 18-20 minutes.

5. Prepare the cashew herb sauce by draining and rinsing the soaked cashews. Place the garlic, lemon juice, basil, and parsley in a food processor. Process until finely chopped. Add the cashews, 1/4 cup water and salt. Process until it reaches the consistency of a thick ricotta cheese (add more water-1 teaspoon at a time-until desired consistency) Taste test and adjust seasonings as needed.

6. Remove the pre-baked pie crust from the oven.

7. Spread a medium-thick layer of the cashew-herb sauce over the crust (there will be leftovers!) then layer with the sliced tomatoes (after patting them dry). Sprinkle with fresh basil, salt + pepper.

8. Drizzle the whole pie with a little olive oil and place back in the oven for 40-45 minutes, or until the crust is dark brown and the tomatoes are lightly shriveled. If the crust is becoming dark brown too early, place a layer of tin foil over the crust to prevent burning.

9. Remove from the oven and let the pie cool for 25 minutes before slicing and enjoying.