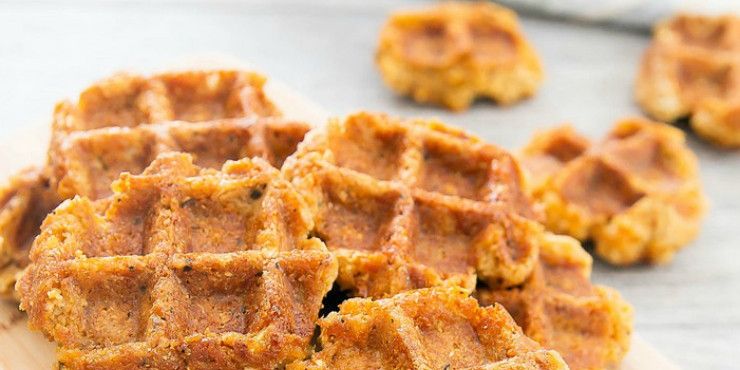 Add the cauliflower, breadcrumbs, cheese and eggs into a large mixing bowl. Mix with a large spoon until everything is evenly combined.

Heat your Belgium waffle iron and grease it (both top and bottom grids).

Scoop out 1/4 cup of cauliflower mixture. You can be slightly under, but don't go over more than 1/4 as it will be too much and it will overlap with the other waffle iron sections. Compact the cauliflower mash a few times between your palms before forming a ball. You need to compact it first, otherwise the mix will become loose while cooking and will be hard to remove off the iron. Place ball into the middle of one of the four sections. Repeat and form three more balls and place into the other three sections.

Lower the top iron down, but do not press it down. The natural weight should be enough. If you press down, the pressure will thin out your waffles too much and cause your waffles to have loose crumbs which will lead to them falling apart.

Cook cauliflower waffles until they are a crispy, dark golden brown. Avoid opening the waffle iron too early to check on them. You will need to cook the waffles longer than when the light indicates they are done, so wait at least for the light before checking on your waffles. Carefully remove finished waffles and repeat again until all your cauliflower batter is used up.