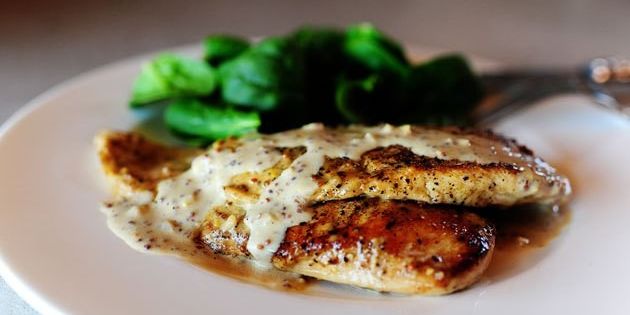 Amount of cream and broth has slightly decreased; add more as needed.

Cut the chicken breasts in half lengthwise so that you have eight smaller, thinner chicken cutlets. Salt and pepper both sides.

Heat oil and butter in a large skillet over medium-high heat. Cook cutlets on both sides until nice and golden brown and cooked through. Remove chicken from the skillet and keep on a plate.

Reduce the heat to medium. Add the garlic to the pan and saute it for a minute, stirring to make sure it won't burn. Next pour in the brandy (or wine if using) being careful if cooking over an open flame. Then just let the booze bubble up and cook until it's reduced by half.

Throw in the mustards and stir to combine, then pour in the cream. Stir in chicken broth, adding more if the sauce seems too thick. Taste sauce and adjust whatever you think it needs. Add chicken breasts back to the pan, nestling them into the sauce. Allow sauce to cook for another few minutes, shaking the pan if needed to move things around.

Serve chicken with a green salad, spooning the sauce over the top.