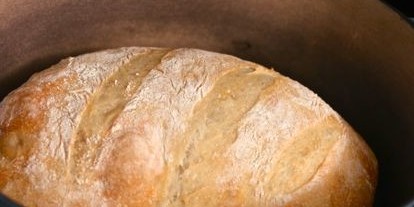 In a large bowl, combine the flour, yeast, and salt. Add the water and stir until all the ingredients are well incorporated; the dough should be wet and sticky. Cover the bowl with plastic wrap. Let the dough rest 12-18 hours on the counter at room temperature. When surface of the risen dough has darkened slightly, smells yeasty, and is dotted with bubbles, it is ready.

Lightly flour your hands and a work surface. Place dough on work surface and sprinkle with more flour. Fold the dough over on itself once or twice and, using floured fingers, tuck the dough underneath to form a rough ball.

After about 1 1/2 hours, preheat oven to 425°F. Place a 6-8 quart heavy covered pot, such as a cast-iron Dutch oven, in the oven as it heats. When the dough has fully risen, carefully remove pot from oven. Unwrap the towel and parchment paper from around the dough and slide your hand under the bottom of the dough ball; flip the dough over into pot, seam side up. Pull the parchment paper off, scraping any stuck dough into the pan. Shake pan once or twice if dough looks unevenly distributed; it will straighten out as it bakes.

Cover and bake for 40 minutes. Uncover and continue baking for 10-15 more minutes,until the crust is a deep chestnut brown.

Remove the bread from the pot and let it cool completely on a wire rack before slicing.