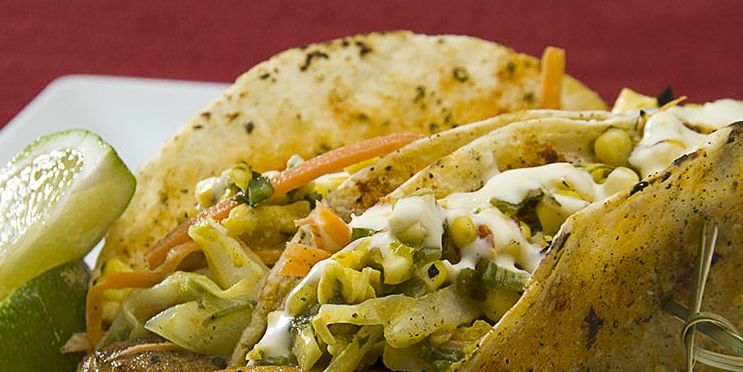 Sprinkle the fish with Old Bay seasoning. I used a George Foreman grill to cook the fish. You could cook it in the oven or a skillet though. In the oven, it will take about 20 minutes. The fish will cook in less time in a skillet. It’s done when it flakes easily with a fork.

For the sauce, stir the sour cream, cilantro, adobe sauce and lime juice together. I just used a spoon to dip out the sauce from the can. I used about 3 spoonfuls. The adobe sauce is spicy, so add according to how much heat your family likes. I froze the rest of the sauce and peppers for another dish. Cut the fish into pieces.

Assemble the tacos by layering the fish, slaw and sauce on warmed corn tortillas. You can also add cheddar cheese, tomatoes or avocado if you like. I used 4 fillets and that was just enough for 5 of us, but one child only ate one taco. All the rest of us had more. Also, we had just enough sauce to go around. If you’re serving more people, you’ll probably want to make more sauce.