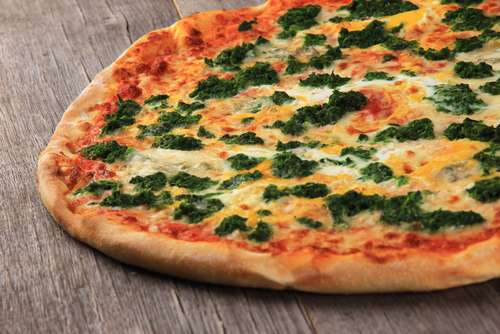 1. In a small bowl, dissolve yeast in warm water. Let stand until creamy- about 10 minutes.

2. In a large bowl, combine flour, olive oil, salt, white sugar and the yeast mixture; stir well to combine. Knead well until a stiff dough has formed. Cover and let the dough rise until doubled in volume- about 30 minutes.

4. Cook the spinach over medium heat in a saucepan. Remove from heat after it is wilted and lightly season with salt.

5. Turn dough out onto a well floured surface. Form dough into a round and roll out into a pizza crust shape.

6. Scatter mozzarella cheese evenly over the pizza base and spread the spinach over this.

7. Sprinkle the Romano cheese, sun-dried tomatoes and a pinch salt.

8. Return to the oven and bake for further for 10 minutes.