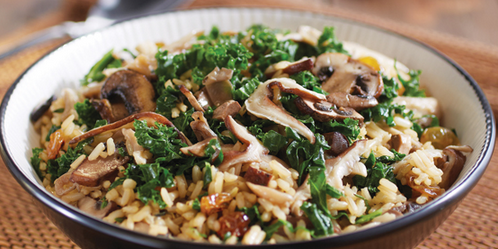 Heat the olive oil and butter in a large skillet over high heat. Add the mushrooms in a single layer, stir well, and cook until the mushrooms release their liquid, and then brown, about 5 minutes more. Stir a few times along the way; you want the mushrooms to be deeply browned on both sides. Stir in the garlic roughly 20 seconds before the mushrooms finish cooking. If you need to cook the mushrooms in two batches, do so.

Transfer the mushrooms to a plate, set aside. Using the same large skillet, cook the tofu along with a couple pinches of salt over medium-high heat until heated through, and until it starts to brown a bit. Roughly one minute before the tofu is finished cooking, stir in the kale. It should collapse and cook down over the next 60 seconds.

Season all the components generously with Shichimi Togarashi(or red pepper) and salt to taste. For each serving, dish up a heaping spoonful of brown rice along with some of the tofu/kale mixture and a some of the mushrooms.

To make a pot of brown rice: The ratio to cook brown rice is 1 part rice to (just shy of) 2 parts water, plus a good dose of salt. The recipe will make more than you need for the above recipe by about double, but it's worth making extra for later in the week.

In a large saucepan over high heat, bring the rice, water, and salt to a boil. Reduce the heat, cover, and simmer gently until the water is absorbed, about 45 minutes. Fluff with a fork and serve hot. Any leftover rice can be cooled and then stored in the freezer for later use.