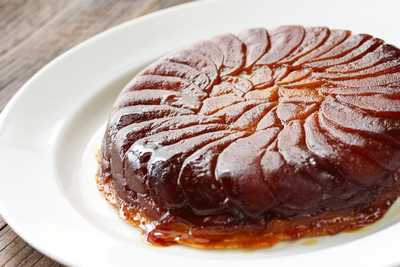 To prepare crust:
Place flour, oats, granulated sugar and salt in a food processor; process until the oats are finely ground. Add margarine one tablespoon at a time, pulsing once or twice after each addition, until incorporated. Add oil and ice water (3 tbsp) and pulse just until the dough starts to come together. Turn the dough out onto a lightly floured surface and knead it a few times until it holds together. Form the dough into a 5-inch disk, wrap in plastic or wax paper and refrigerate while you prepare the filling.

To prepare filling:
Toss pears and apple with lemon juice in a large bowl.

Place brown sugar, margarine, cinnamon and ginger in a 10-inch ovenproof skillet; cook over medium-low heat, stirring, until the margarine and sugar are melted and the mixture starts to bubble and turns into a light caramel colour; be careful not to overcook. Remove from the heat.

Starting at the center of the skillet, arrange the pear and apple slices in concentric circles, overlapping the slices and adding another layer until all the slices are in the pan. Scatter cranberries on top.

Return the skillet to medium-low heat and bring the liquid to a simmer. (It might be hard to see the simmering, so take a peek under the fruit or listen for the bubbling). Cover and cook for 5 minutes. Uncover and cook, gently swirling the pan occasionally, until the sauce becomes a thick, caramel-like glaze, 7 to 10 minutes. Remove from the heat.

Transfer the skillet to the oven. Bake until the crust is just beginning to brown around the edges, 30 to 35 minutes. Let cool for 15 minutes. Run a knife around the edge of the pan to release the crust. Place a serving plate larger than the pan on top of it and invert the tart onto the plate (it may take a light shaking to release the tart from the pan). Serve warm.


Make Ahead Tip: Prepare the crust, wrap tightly and refrigerate for up to 3 days.