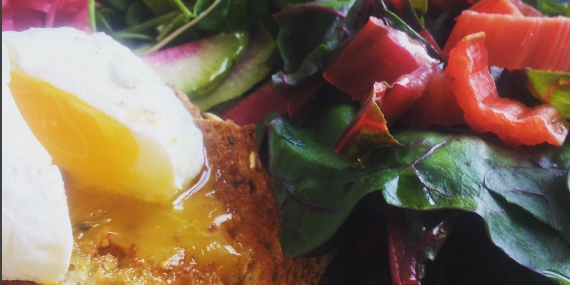 Bring a small pot of water to the boil, then lower the temperature until just simmering, where you can see little tiny bubbles but the water is no longer boiling. Add white vinegar. Using a knife, crack the egg into a cup and gently add to the simmering water. Do not touch the egg with any utensils at this point.

In the meantime, toast your sourdough bread.

In a small pot, bring 1/2 cup water to a boil, place a collapsible metal steamer on top, making sure the water doesn't rise up above the metal surface. Slice the stems of the swiss chard and add that first to the steamer, cover. After one minute, add the swiss chard leaves, torn. Steam for 3 minutes until the stems are softened. Set aside.

After 3 minutes, using a plastic slotted spoon, removed the poached egg and set aside.