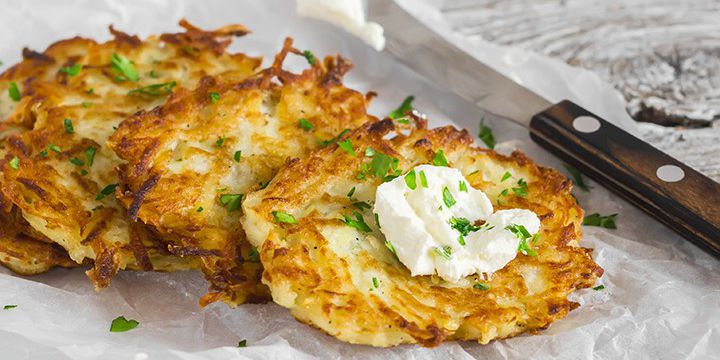 Preheat an oven to 250°F. Line a baking sheet with paper towels.

Place the cauliflower in a food processor and pulse until pea-size pieces form. Transfer to a large bowl.

In a large fry pan over medium heat, warm 1/2 inch of oil. Meanwhile, scoop out about 2 Tbs. of the potato mixture and flatten into a patty. Repeat with the remaining mixture to make 24 latkes.

Working in batches, place the latkes in the oil and press down with the back of a spatula. Cook, turning once, until the latkes are golden brown and crispy, 3 to 5 minutes per side. Using a slotted spatula, transfer the latkes to the prepared baking sheet and keep warm in the oven while cooking the remaining latkes.

Serve as soon as the last batch is cooked; latkes stay crisp only a few minutes. Transfer the latkes to individual plates and garnish with chives. Pass caramelized applesauce alongside. Makes 24 latkes.