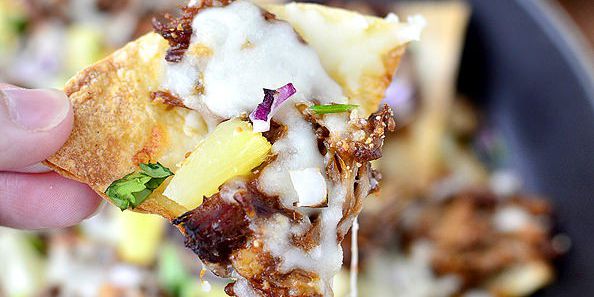 Place pork into the bottom of a large crock pot (I used a 6-quart) then season generously with garlic salt on all sides. Add can of chopped pineapple including the juices, 1/2 cup BBQ sauce, and sliced onion. Mix slightly then cover and cook on low for 7-9 hours, or until meat shreds easily. Shred then mix 2 cups pork with remaining 1/2 cup BBQ sauce (there will be extra pork - it freezes well!) Discard cooking liquid.

Meanwhile, preheat oven to 400 degrees then stack tortillas and cut them into quarters with a sharp knife. Place wedges onto two baking sheets leaving at least 1/4" between each wedge. Spray tops with nonstick spray or mist with extra virgin oil then season with salt. Bake, rotating pans halfway through, for 8-10 minutes or until golden brown around the edges. Chips will crisp as they cool. (Can be made ahead of time - cool completely then store in an airtight container.)

Layer half the chips into the bottom of a 12" oven-proof skillet then top with half the pork, cheese, pineapple, and chopped red onion. Repeat layers one more time then bake for 7-10 minutes, or until cheese is melted. Alternatively you could use a baking sheet instead of a skillet.

While nachos are baking, combine avocados, garlic, lime juice, and salt in a bowl. Smash with a potato smasher or fork until desired consistency is reached. Fold in cilantro and pineapple tidbits. Serve Pineapple Guacamole with nachos, along with extra BBQ sauce for dipping.