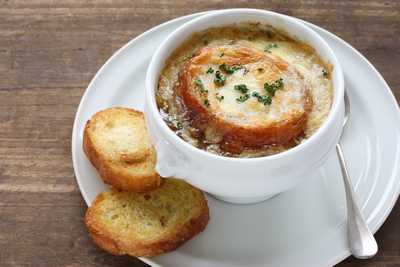 Add sherry and pepper. Increase heat to medium-high and cook, stirring, until most of the liquid has evaporated, about 30 seconds. Stir in broth and chickpeas; bring to a boil. Reduce heat to a simmer and cook until the vegetables are tender, about 3 minutes. Remove from the heat and stir in chives (or scallion greens).

Place bread in the bottom of 2 bowls; top with cheese. Ladle the soup over the bread and cheese and serve immediately.

Note: Sherry is a type of fortified wine originally from southern Spain. Don't use the “cooking sherry” sold in many supermarkets—it can be surprisingly high in sodium. Instead, purchase dry sherry that is sold with other fortified wines in your wine or liquor store.