Shepherd's Pie in a Jar 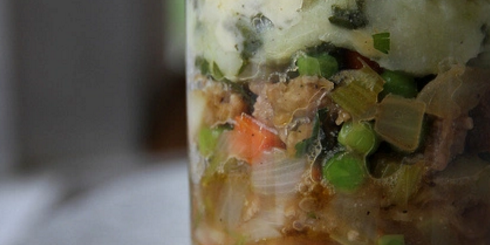 Prepare the topping:
Peel the potatoes and chop into large cubes. Place in a medium-sized pot and cover with water. Bring to a simmer over high heat, and then reduce heat to low. Simmer about 15 minutes, until the potatoes begin to break apart when poked with a fork. Drain the potatoes, return to the pot, mash thoroughly and cover.

While the potatoes are cooking, bring the kale, leek, milk, butter, salt, and nutmeg to a simmer in a small pot. Keep covered and stir occasionally until soft, 10-12 minutes. Add the kale mixture to the mashed potatoes and stir to combine. Keep covered while you prepare the filling.

Prepare the filling:
Heat one tablespoon of the olive oil in a sauté pan over medium-high heat. When the oil is hot, add the vegetarian sausage crumbles. Cook until browned. Set sausage aside on a plate.

Put ½ tablespoon olive oil in the same pan used for the sausage. Add onion, garlic, celery, carrot, cabbage, bay leaf, salt and pepper. Sauté for 10-12 minutes, until soft. Add flour and stir until veggies are evenly coated. Next add the Guinness, broth, and Worcestershire and cook until thick and bubbly, stirring constantly. Add the sausage, peas, and parsley and continue to cook until combined and warmed through. Remove the bay leaf.

Bake the filled jars:
Place jars on a rimmed baking sheet. Bake at 400° F for 20 minutes. Remove the sheet with jars from the oven, and switch setting to broil.