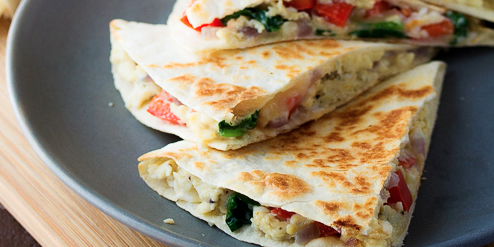 In a large non-stick pan, heat the olive oil over medium heat.

Cook the bell pepper and red onion until soft, around 4-5 minutes.

While cooking, whisk together the eggs, milk, salt and pepper.

Add the egg/milk mixture to the peppers/onions, stirring frequently, until eggs are nearly cooked through.

Add the spinach and feta and fold into the eggs, stirring until spinach is wilted and eggs are cooked through.

Spray a separate large non-stick pan with spray oil, and heat over medium. Add the tortillas, then on half of each tortilla, spread about ½ cup of the egg mixture. Top with around ⅓ cup of shredded mozzarella cheese. Fold the second half of the tortilla over, then cook for 2 minutes, or until golden brown.

Flip and cook for another minute or so (until golden brown).