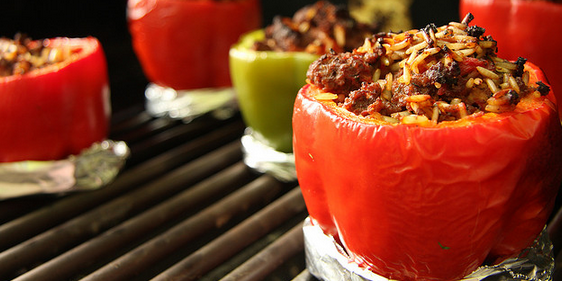 To make the stuffing:
Heat the oil in a medium pan with a lid and fry the pine nuts until lightly toasted, then add the rice and fry until the grains are glossy. Stir in the garlic, then add the stock and bring to the boil. Cover and cook for 10 minutes, until the rice is tender. Remove from the heat, cool slightly and stir in the spring onions, cherry tomatoes, mozzarella, gorgonzola and fresh herbs. Season well and leave to cool.

Stuff the peppers: cut around the stalk from one pepper, remove and set aside. Make one slit down the length of the pepper and open out gently. Remove the seeds and membrane.

Spoon some filling into the pepper cavity, taking care not to overfill.
Take about a metre length of kitchen string and wrap the centre point several times around the pepper stalk, tying it firmly.

Top with the stalk and wrap the ends of the string several times around the pepper to secure the filling. Tie the ends in a knot. Repeat with the other peppers.

Barbecue the stuffed peppers over moderate heat for 15-20 minutes, turning gently until the peppers are evenly browned. Don't worry if the string chars and if the peppers split too much - wrap them in a piece of foil and finish cooking in the foil wrappers.