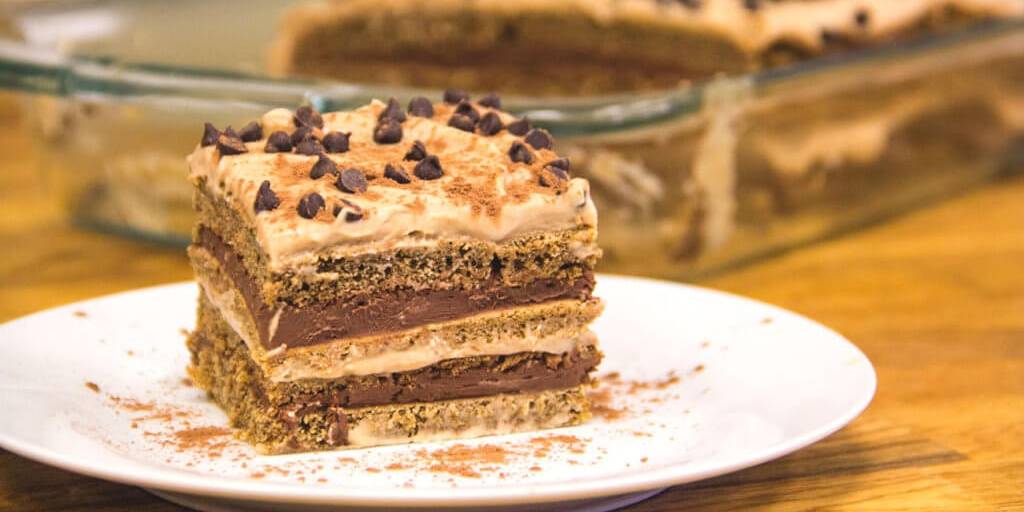 In a large mixing bowl, combine all of the cake ingredients and spread thinly onto two parchment-lined baking trays. Bake for 20 minutes and allow to cool.

In another large mixing bowl, whisk together all of the “base cream” ingredients until smooth, ensuring each of the ingredients is room temperature. In case the mixture separates, simply heat over a double boiler until it comes together.

Divide the “base cream” in half and add Lucuma to one half (light brown cream) and cacao powder to the other (dark brown cream). Mix well and refrigerate for several hours until fully set.

To assemble, cut each of the thin cake layers in half, forming 4 total cake layers.

In a bowl combine dipping liquid ingredients and then dip each of the cake layers into it right before layering.

Divide both dark cream and light cream into half and set aside.

In a rectangular glass baking dish start the assembly with a cake layer, followed by dark cream, another cake layer and topped with light cream. Continue layering until all ingredients are used up and top with chocolate chips.

Allow to cool for at least an hour before cutting. Sprinkle with cinnamon when serving.