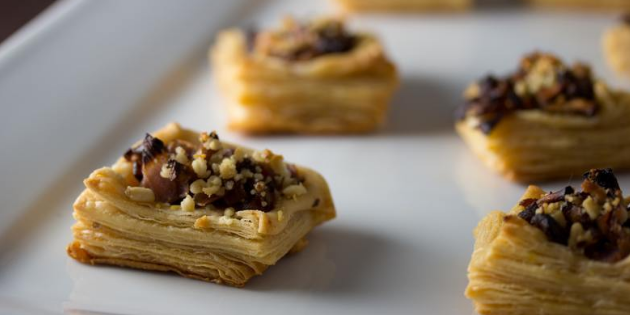 To prepare the puff pastry:
In a medium mixing bowl, whisk together the bread flour and 1 ¼ cups of the all-purpose flour and salt.

Add the flour and salt mixture to a medium mixing bowl and whisk to combine. Use a pastry cutter to cut in the 1/2 cup Vegan Butter until the mixture has pea-sized chunks of butter. Drizzle in the ice water and lemon juice and mix using the mixing spoon until just combined and the butter pieces are no longer visible. Transfer the mixture to a clean counter and quickly knead until the butter starts coming off in your hands, about 30 seconds. If the dough is initially too wet, add up to ¼ cup of all-purpose flour in 1 Tablespoon increments until you get the desired texture.
Roll the dough into a ball and use a sharp knife to cut an X shape into the top, extending halfway through the dough. Cover with plastic wrap and refrigerate for at least two hours.

In a medium mixing bowl add the 1 ¼ cups Vegan Butter pieces, ¼ cup all-purpose flour and mix on low until just combined. Place the mixture on a sheet of plastic wrap and use a bench scraper to shape to a rough 6 inch square. Wrap the Vegan Butter square in the plastic wrap and shape it to a more accurate square. Refrigerate for at least one hour.

Place the dough on a lightly floured surface, coat your rolling pin with four and roll out along the X to 12 inches square. Roll three times in each direction using long even strokes, dusting your rolling pin with flour as necessary. Remove the Vegan Butter from the plastic wrap and place it diagonally on top of the dough. Fold the corners of the dough over the Vegan Butter as if you're wrapping it like a gift. Pinch the dough ends together to seal.

Use a rolling pin to lightly tap the dough, starting from the center and working your way towards the edges until the square becomes bigger. This helps make the fat pliable so it can be rolled with the dough. Carefully roll the dough out to 14 inches square. Feel free to dust the dough with flour if it begins to stick to anything. Fold the dough in three folds like a tri-fold business letter. This is known as a turn in the laminated dough world.Now turn the dough 180 degrees and fold it in three folds again so it turns into a square. This counts as another turn. Wrap the dough in plastic wrap and refrigerate for at least one hour. The refrigeration allows the fats to re-solidify and the gluten in the dough to relax. This causes the dough becomes more pliable and elastic while maintaining it's strength. Now is a great time to take a break for a day or so. It's important to not let the dough sit in the refrigerator for more than 3 days because it can start to discolour.

Prepare the mushrooms:
Add the vegetable oil to a skillet placed over medium heat and heat until hot. Add the mushrooms, onions, miso and saute for 5 minutes while stirring frequently. Add the garlic and saute for another 4 minutes. Stir in the rice wine vinegar and umeboshi plum vinegar to deglaze and saute for 1 more minute. Remove the ingredients from heat and place them in an airtight container in the refrigerator.

Preheat your oven to 375F (191C). Roll puff pastry to 15 x 15 inches. Cut the puff pastry with a dough cutter or pizza cutter so it’s in 3 inch squares. You should have 4 cuts in each direction.

Place 7 to 8 squares on each baking sheet, taking care to lay the dough on the side that was previously facing up. Flipping the dough on it's other side ensures that the best side of the dough is on the outside and the pastries look as good as possible. When you’re done with one sheet, place it in the refrigerator while you work on the next one. If your puff pastry dough starts to melt and become gooey at any point in preparation, place it in the freezer for about a half hour so the fats re-solidify.

Remove one of the baking sheets from the refrigerator. Place 2 Tablespoons of filling in the middle of one of the dough squares and top them with a dusting of pine nuts.

Bake for 30 to 35 minutes or until they're golden, making sure to rotate the baking sheets 180 degrees halfway throughout the baking duration. It’s normal for some fat to ooze out during baking.

After they’re removed from the oven, use a spatula to transfer them to a cooling rack. Serve warm. If you’re serving these pastries after they have cooled, place them in a 400F (204C) oven for about 15 minutes to re-crisp them before serving. Re-crisping puff pastry before serving is really important. If you don’t re-crisp them they’ll taste mushy and all that work preparing your puff pastry won’t be appreciated.

Kimchi Puff Pastry with Shiitake Mushrooms and Pine Nuts will keep in an air tight container at room temperature for about 1 week.