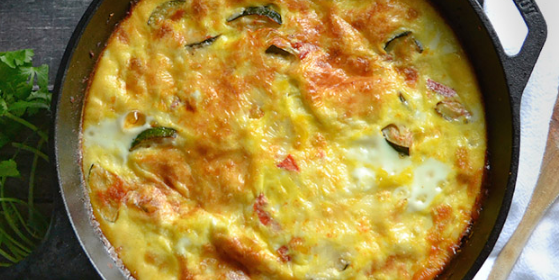 Mince the garlic and dice the zucchini and tomatoes. Add the garlic, zucchini, tomatoes, and corn kernels to a cast iron skillet along with the cumin, salt, and some freshly cracked pepper.

Sauté the vegetables over medium heat until the tomatoes have broken down and most of the moisture has evaporated off the bottom of the skillet.

Meanwhile, preheat the oven to 350 degrees. In a large bowl, whisk together six large eggs and ½ cup of milk.
Once the vegetables have cooked down and most of their juices have evaporated from the skillet, sprinkle the Monterrey jack cheese over top. Pour the egg and milk mixture into the skillet. Move the vegetables around slightly with a fork or spoon to let the egg run underneath them.

Transfer the skillet to the oven and bake for 30-35 minutes, or until the top is golden brown and puffy. After baking, slice the frittata into six pieces and serve.